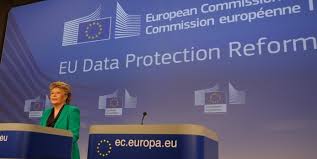 On behalf of the eNACSO, the expert John Carr recently spent a couple of days in Brussels talking to people who had been closely involved in writing the GDPR.  Here he reports on what he learned from those conversations.

In January, 2012, the Commission of the European Union  published a consultation document setting out a detailed proposal for  the GDPR. This followed a “pre-consultation consultation” which started in 2009. The GDPR was a long time coming and that made what  happened to children and young people at the 59th minute of the 11th hour all the more surprising and disappointing.

The Commission told the world the GDPR is a vital building block in a larger, strategic plan to develop an EU-wide Digital Single Market (DSM). Whichever way you look at it there is no doubt the GDPR is a monumental legislative achievement of the highest importance yet in respect of children’s rights and online safety it is seriously flawed.

The final text was adopted at the LIBE Committee on 17th December, 2015. It still has to be ratified. This is expected in May although an amendment is being discussed which might put that date back by a month or two.

There are positive features in the GDPR which will benefit children and young people, the right to be forgotten likely being the best known, but at the same time the GDPR’s shortcomings are substantial, inexcusable and unacceptable. The EU constantly tells us it takes children’s and young people’s issues seriously. This episode paints an entirely different picture.

Article 13 uses similar language: The child shall have the right to freedom of expression; this right shall include freedom to seek, receive and impart information and ideas of all kinds, regardless of frontiers, either orally, in writing or in print, in the form of art, or through any other media of the child’s choice

Note the absence of any reference to an age limit or the need for parental consent.

How has this come about?

Part of the answer to that question connects to the opaque, calculated and in the end extremely hurried processes followed. Low rent politics drove decisions. Evidence and principles played no part.

The EU hands over policy-making to the USA?

In relation to the minimum age at which a young person can decide for themselves whether or not to join an online service the Commission originally proposed 13. However, no impact assessment was carried out to explain or justify it. In the wider study published by the Commission at the time the draft GDPR was released it merely said (at page 67) their choice of 13 took

“…..inspiration…..from the  current  US  Children  Online  Data Protection Act (sic) of 1998 and are not expected to impose undue and unrealistic burden (sic) upon providers of online services. “(bold added for emphasis).

The US law in question is actually called the Children’s Online Privacy Protection Act (COPPA.) It was intended to protect children (for these purposes defined as persons below the age of 13) from commercial exploitation. This Federal law made 13 a legal requirement for every US-based company e.g. Facebook and Instagram and explains why 13 had become a de facto standard in a great many countries. From that point of view it is not hard to imagine why Commission officials thought 13 would get an easy passage. Turns out they got that very wrong.

Nevertheless, we have to ask if the Commission routinely sub-contracts its policy-making functions to Washington DC? COPPA predates the social media explosion that emerged from the development of Web 2.0. It is widely acknowledged to be hopelessly out of date and ineffective in a number of key ways.

Whatever the reason, the Commission’s failure to carry out their own, independent impact assessment in respect of 13 was an egregious error. But it was not the result of carelessness or a lack of resources. It was part of a deliberate strategy.

As we shall see the lack of a proper impact assessment was going to have considerable consequences. This is more than merely ironic because in the GDPR itself Article 33 expressly requires everyone else to carry out a data protection impact assessment which takes into account the nature, scope, context and purposes of any proposed data processing where that data processing is likely to result in a high risk for the rights and freedoms of individuals. Children and young people are individuals. And they have rights.

Refusing to face the issue

How do we explain the decision not to undertake an impact assessment? It seems right at the beginning everyone on the inside track in the Commission and others elsewhere anticipated that the age thing was going to be tricky.

Remember the current (1995) Directive had been silent on the point. This time around there was some support for maintaining such a stance but a majority finally accepted that was now untenable.

Rather than face any national or other sensitivities around age and debate them openly – there could even be a question about whether the EU had competency in this space – the plan was to finesse (read “manipulate”) the process. Officials believed they could pull it off and end up with what they wanted: 13. Did the conversation go like this?

The age business could mess up and delay everything so let’s leave it until as late as possible, after we have made lots of progress with all the other stuff.  If we get the timing right everyone will be fed up with the GDPR.  They’ll want it done and out of the way. They’ll have to agree something. 13 is the only show in town. Hold your nerve. Keep your eye on the glittering prize.

The results of absence

Perhaps inevitably, because there was no impact assessment, when it came under attack there were no robust arguments to hand to defend or justify 13 as the minimum age. Simply saying that’s the way the Americans have been doing it for years so we’ve all got used to it clearly didn’t cut any ice.

In early December, 2015, as everybody thought the process was indeed drawing to a close, disaster struck.  16 suddenly appeared from nowhere (again with no impact assessment attached to it) and supplanted 13. Word of this leaked. A media storm broke out. Everyone involved then went into an undignified, panic-driven flip flop. A frantic scramble took place to change policy.  48 hours later a new one emerged. Young people’s interests were sacrificed on the altar of expediency amidst worries about a few here-today-gone-tomorrow headlines. At no point did the parties to the GDPR negotiations seek any expert counsel on what the policy ought to be.

Not one but four

What have we ended up with? Not one age – which makes some kind of sense if building a DSM is the overarching objective, but four ages.

As already noted the GDPR makes 16 the default age but Member States now also have an option to choose 15,14 or 13 instead. Absent any evidence justifying them 16 and 15 will be impossible to defend within the terms of the UNCRC. Still, the menu does seem to have diverted the media’s attention. Mission accomplished.

Balancing the differences, resolving the tensions

How do we balance a laudable desire to protect young people from commercial exploitation with their undoubted right to express themselves? Are commercial exploitation and its associated data collection practices the only relevant factors to be considered anyway? Not everything that matters on the internet is about money. Other things being equal within any single jurisdiction is it right to have but one age governing every aspect of young people’s privacy?

In other areas the EU is intent on tearing down internal barriers. Here it is erecting them. Why? The menu of 16, 15, 14 or 13 cannot be about subsidiarity. Those ages do not fit with every Member State’s existing data protection laws (the ones the GDPR is otherwise harmonising).  I know of two large countries that will have to change their law if the GDPR remains as it is, the UK being one of them.

If things stay as they are it is not hard to predict what will happen. The mighty US companies will lobby country by country for 13 (their status quo). They will win in some and lose in others. The temptation to stay with the default of 16 is likely to be the path of least resistance but it will be interesting to see how the balance pans out and learn what that teaches us about EU decision-making.

Is the EU happy to contemplate or encourage the emergence of diverging youth cultures within the Union? Isn’t that the obvious implication of the decision they have made? The ramifications of such a development are potentially quite profound. They should be talked about not allowed to creep in under the radar.

The non-compliance problem among children was acknowledged by the Commission (at page 23 of their study) back in 2012. Now it is a great deal worse. Look  at the levels of non-compliance with current age rules shown in a recent study published by the BBC.  75% of 10-12 year olds in the UK have social media accounts with sites or services which specify a minimum age of 13. Glance also at the work of EU Kids Online showing similar high levels of non-compliance across the whole Union in 2011. All of the percentages will have gone up since.

The GDPR does nothing to address this. On the contrary without any corresponding requirement to carry out age verification, by setting higher age limits the GDPR will teach or entice even larger numbers of children to misrepresent their age so as  to get into the otherwise forbidden places where children will believe all the best things are going on.

This sorry tale does not point to failings on the part of a particular individual or European Institution. Rather it points to a systemic or collective failure.

We have to find a way to ensure things like this cannot happen again.